Deciphering These Rattles Of Diplomacy 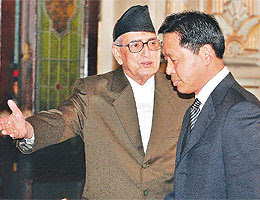 The fact that Chinese Ambassador Zheng Xianglin became the first foreign envoy to present his credentials to Prime Minister Girija Prasad Koirala contained much symbolism. The normally reticent official Chinese media, too, highlighted how this development broke the tradition of ambassadors presenting credentials to the king.
Equally meaningful was the reality that the Chinese recognized Koirala as head of state only after the prime minister unequivocally called for Beijing’s inclusion in the South Asian Association for Regional Cooperation as a full member. And that, too, at a time when India wasn’t willing to let Beijing even contribute to the regional development fund.
That’s not where diplomatic symbolism stops, as Nepalis wade deeper into the nebulousness of newness. Nancy Powell, the specialist for South Asia at the National Intelligence Council (NIC), is to succeed James F. Moriarty as US ambassador later this year. The NIC is the US intelligence community’s center for midterm and long-term strategic thinking. It supports the Director of National Intelligence, who heads the 16 US intelligence organizations. That position, one may recall, was created in the aftermath of the intelligence failures leading up to the 9/11 attacks.
Since March 2006, Powell has been leading the NIC effort to expand its coverage in a region vital in the war on terror. She has been working to enhance the NIC’s focus on questions related to India’s emerging as a major power, in addition to India-Pakistan relations.
Let’s consider Powell’s appointment from another angle. This is the first time the US has appointed as its top diplomat in Nepal someone who has already served as ambassador at a more important South Asian nation. (Barring, of course, the ambassadors to India concurrently accredited to Nepal in the old days.)
Named ambassador to Pakistan almost a year after the 9/11 attacks, Powell presided over the strengthening of the Washington-Islamabad alliance in the war on terror. By upgrading the embassy’s physical infrastructure as well as the stature of the ambassador, Washington’s has underscored the elevation of its interest in Nepal.
India’s ambassador-designate Jayant Prasad offers another symbolism. A seasoned foreign service officer, he is the son of Bimal Prasad, India’s ambassador to Nepal in the early 1990s. Prasad Sr., one recalls, was the man who told Nepali Congress president Krishna Prasad Bhattarai that Prime Minister Girija Prasad Koirala was sacking six ministers close to Ganesh Man Singh. After coming to power in 1994, the UML mobilized its allies in the Indian Left to instigate Bimal Prasad’s recall for his perceived proximity to Koirala and the Nepali Congress.
Jayant Prasad may not necessarily share his father’s outlook or approach at a time when Koirala is back in the saddle – and a shaky one, one might add. Given the overt external dynamics defining Nepal’s political process, more germane to us may be Prasad Jr.’s views on the other two central players, the United States and China. He is found to be most candid on this front long before the Indo-US strategic partnership blossomed. As a fellow at Harvard’s Weatherhead Center of International Affairs in 1998-99, Prasad clearly saw the contours.
“The attractions of an expanding market, made more accessible by openness to foreign investment and a lowering trade barriers, as also India’s pattern of responsible behaviour on matters affecting the vital interest of the United States, without compromising on its own principles, such as in the Middle East, the Gulf, Afghanistan and in the SAARC region, is shaping this improvement in relations,” he wrote in a paper. “There is a more ready realization in both India and the United States that their way of life and manner of thinking, the shared commitment to democracy, multiculturalism and the rule of law provide deeper affinities in the present context, even if they did not do so in the past.”
Stating that the waxing and waning of Sino-US relations would have an inevitable impact on relations with India, given its countervailing utility, Prasad wrote: “[B]ut this will be US inspired and not part of India’s strategic design. India seeks a more intense engagement with the United States for its own sake, in recognition of its relative stability and potential as a reliable, long-term partner.”
In what would turn out to be a disturbing prescience for many Nepalis, Prasad asserted: “Both sides need to show consideration for each other and acknowledge their commitments and frailties. They will have to put up with the incertitudes of their domestic politics and compulsions of geopolitics.”
Prasad’s views on India’s role in Nepal are apparent enough. How do they square with contemporary American views? As ambassador in Islamabad, Powell apparently persuaded New Delhi that she was a friend of India’s. (She once described Pakistan as a platform for terrorism, a remark that won instant Indian admiration.)
Today Indian media have been pointing to growing links between Pakistan’s Inter Services Intelligence and Nepali Maoists. Couple this with a recent report by Stratfor – considered the private-sector equivalent of the CIA – on ISI-led efforts to expand the Islamization of India’s vital northeast corridor. Put those two developments together with the Maoists’ growing temptation to view India once more as their No.1 enemy.
Regardless of whether the “thickening of [Indo-US] interlinkages” is progressing in keeping with what Prasad had envisaged at Harvard, Chinese Ambassador Zheng, too, probably hears the Nepali pot rattling loud and clear.
Posted by Maila Baje at 6:07 PM