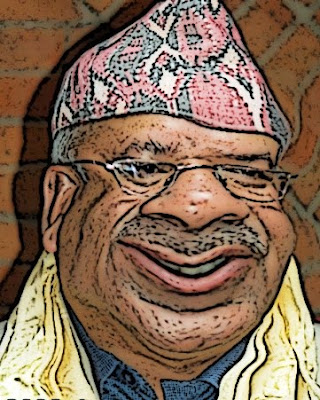 Anxious to regain the initiative, Prime Minister Madhav Kumar Nepal warned the other day that the constituent assembly could be dissolved. But the parliament that the elected body doubles as wouldn’t be, he was quick to clarify. If the prime conciliator was expected to attempt a middle way out of our deepening deadlock, he did not disappoint. Especially since he passed the buck to President Ram Baran Yadav.
Amid the roughness of our road, Prime Minister Nepal has remained relatively unruffled. Banter, somberness, nonchalance and fretfulness have all been hallmarks of his public persona. But there have been unmistakable traces of serenity at the core. The pressure has inevitably caught up with him.
Just when he thought he was beginning to exercise a semblance of control, Maoist chairman Pushpa Kamal Dahal and Nepali Congress president Girija Prasad Koirala sealed a deal in Singapore. The details are murky, allowing for a range of speculation that varies wildly with one’s prejudices more than predilections. Instead of trying to grasp the disparate tea leaves, the premier has upped the stakes.
Indeed, what choice does Nepal really have when his own party has deserted him but does not seem to know for what? Unified Marxist-Leninist chairman Jhal Nath Khanal laments the tendency of the political class to reach out to Singapore and Hastinapur, mere days after his own return from New Delhi. The first thing Maoist-critic Khadga Oli does after alighting from his flight from Delhi is to urge the ex-rebels to join the government.
And Bam Dev Gautam asks the premier to sacrifice for the nation by, yes, resigning, as if the reiteration of that plea from him is entirely painless for us to hear. If consistency is visible anywhere in the UML, it is surely in the sturdiness of the shield Defense Minister Bidya Bhandari has provided the army.
Nepal’s brief bonhomie with Barack Obama wasn’t going to push him too far. Before that, the Indians certainly gave him a boost during his sojourn there. When Indian Ambassador Rakesh Sood nicknamed Nepal panditji, our premier knew he was no Jawaharlal Nehru. But he must have thought he could use the backslapping to get the north on his side. But Chinese support – at least the palpable kind that translates into political strength these days – has been sorely lacking.
The itinerary for Nepal’s China visit was supposed to be announced the day after he returned from the U.N. General Assembly. Whether Beijing actually distrusts Nepal or his durability in office is becoming immaterial. Our prime minister simply could not fathom how sordid Sood’s appellation might turn out to be.
The broader picture is not all too bad. NatGeo heralds Nepal’s rebirth as the origin of adventure tourism. KFC and Pizza Hut are about make their grand entry to soak up Nepalis’ disposable income. Yet Nepal finds himself submerged atop a seemingly rudderless ship. So it becomes easy for him to sentimentalize a bit. Sure, Dahal may have almost wept to bring him into the constituent assembly. But that was then. Just like when Koirala proposed him for premier only to renege it in front of the then king. Like when Dahal invited him for talks in Lucknow and Silguri during the subterranean days, only to castigate him as a neo-Rayamajhi when the genuine article was very much around.
As for Nepal’s middle way, it might be able to maintain a semblance of continuity of the peace process, while allowing the protagonists to fight it out even harder. But here’s the rub. The people voted for the constituent assembly. The parliament part was an afterthought. The two should go out together, if they must. Even a moderate like our premier must surely see the virtue of radicalism on this one.
Posted by Maila Baje at 8:36 PM