Aww Sorry, If It Helps 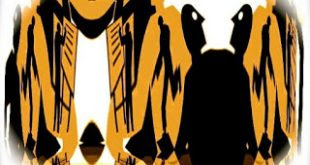 Here we go again.
A newly unified (sort of) ruling party says it’s going to work toward parliamentary endorsement of the US Millennium Challenge Corporation compact. With clockwork precision, reports emerge of China having encroached Nepali territory in Humla. And just in time, a B-grade freelance journalist in India is arrested for spying for China, and the handler happens to have a Nepali associate.
All this comes amid vibrant discussions among academics and analysts (mostly the YouTube kind) predicting the polity is on the verge of collapse. You might not think so from how well Constitution Day just went. Yet, we are told, some major realignments are occurring. COVID-19 infections and isolations have provided the cover for extensive political consultations.
China, which worked so hard to unite the Communist Party of Nepal and toiled even harder to keep it so, now wonders whether it was all worth it. The Indians and Americans are intent on destroying the current polity, we hear. The Indians, yeah, since they can get rid of Nepal’s new map. But the Americans? They might want the MCC endorsed really bad, but to the point of regime change?
Or maybe it’s the wily Indians there, too. They dragged the Americans kicking and screaming to the 12-Point Agreement in 2005. We know that the Modi government has, for all practical purposes, renounced that course. But what about the External Affairs Ministry and Research and Analysis Wing blokes who wrote the script? Maybe they want Uncle Sam to take the fall with them.
Some suggest Prime Minister Khadga Prasad Oli’s inner-party composure comes from the satisfaction that he is on the verge of handing the keys of Narayanhity Palace to the ex-monarch. (Now let’s be honest here. From the status the ex-monarch has been enjoying under republicanism within the country and among our immediate neighbors, can we really say that he’s not still the de facto head of state?)
The way Oli seems to be cozying up to the Indians these days may give credence to such suggestions. But the Chinese probably feel a sense of betrayal, too. The last time they could blame Pushpa Kamal Dahal and Sher Bahadur Deuba for not following through on the agreements Oli the anti-embargo crusader had signed up north. But Oli not following through on his own commitments?
Now, don’t for a minute believe that the Chinese aren’t still seething from Nepal’s last-minute refusal to sign the extradition treaty during President Xi Jinping’s visit last year (prompting that Beijing-datelined ‘bones and bodies’ rhetoric when the guest was still here.)
Flashing the ‘India card’ to Beijing after the rancor with New Delhi over the past year may be good tactics. But it’s certainly not good optics, especially when all you’ve got are nine new structures in a remote part of the country. How do we know they’re not structures China built as part of its security arrangements with Nepal when we were fast-tracking our constitution five years ago?
Yet the Indian media are running with the story faster than they did with the last – and subsequently discredited – one. Worse, they are citing those same disgraced stories to back up their current claims.
You’ve got to ask. Is our internal disarray giving the three principal external powers the space to fight? Or is our political establishment letting them brawl to avoid blame for the collapse of Delhi Compromise II?
If it’s all about taking the blame, how about we, the Nepali people, do that? We did let them con our senses out of us, didn’t we?