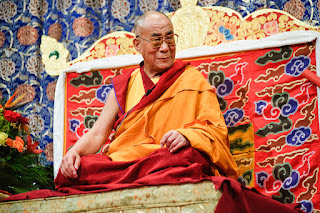 You’ve got to feel for the Dalai Lama. He’s sitting somewhere minding his own business when his Indian hosts start howling they might now support a Free Tibet.
Yeah, he’s otherworldly. But much can the guy take? He fled Tibet once in his late teens to see if that might help his homeland. Nope. He returned. The blokes in Beijing (or, Peking then) strung him along until 1959. The Americans egged him on to leave once more. They wanted Sri Lanka to take him in. In the end, the Indians did and had to fight a war for that (okay, at least partly).
Over the decades, he won the Nobel Peace Prize, hung out with Hollywood and counterculture celebrities before joining the fraternity himself. His homeland? Barely recognizable. So he sent his older brother in Kalingpong over to talk to the Chinese communists. Just as things seem to go well, it turns out they don’t. China’s rise ushers in a love-hate relationship with the world. His Holiness adjusts his itinerary accordingly. Things go wrong with Beijing, and the Dalai Lama enters the White House through the front door. And when things sour, well, the kitchen door is splashed across television screens.
The recent clashes in eastern Ladakh have weirdly weaponized the Tibet issue. A leaked report to the media revealed the secretive Special Frontier Force, recruited mainly from the Tibetan community in India, was used in the operations in southern Pangong Tso. One soldier Tenzin Nyima died in a mine blast, and independent Tibet’s flags were flown at the funeral. A top Bharatiya Janata Party leader attended the funeral and tweeted about it, before taking it down.
The hyper-realists couldn’t contain themselves. The ‘Tibet card’ was alive. Not sure how the leak affected Indian External Affairs Minister S. Jaishankar’s meeting with his Chinese counterpart Wang Yi in Moscow. The influential Global Times wasn’t impressed. ‘Playing Tibet card will incur damage to New Delhi’, was the headline of Li Qingqing’s commentary. Too cliched? Wait for the money quote: “If India openly supports ‘Tibet secessionism’ on border issues, does it mean that China can also support the insurgencies in Northeast India?”
Granted, Li didn’t say that. He quoted Qian Feng, director of the research department of the National Strategy Institute at Tsinghua University. But you get the drift.
Prime Minister Narendra Modi has been gutsier than his recent predecessors. In 2014, he invited Lobsang Sangay, the ‘prime minister’ of the Tibetan government in exile to his swearing-in ceremony. The Modi government has allowed interfaith conferences other events before and after President Xi Jinping’s visit to India. Furthermore, references to Tibet being a part of China ceased being a regular part of  Sino-Indian bilateral statements, ostensibly to force China to be more explicit about India’s sovereignty over Arunachal Pradesh and Jammu and Kashmir.
But then, two years ago, the Modi government forced the Dalai Lama to cancel events marking the 60th anniversary of his exile in India. And now, this?
His Holiness is too good a host not to play the part. But he’s probably not too bothered. He’s about to exit the scene. He’s done the most he can: insist that his successor may be a female born outside Tibet. Yet the Dalai Lama probably knows that Chinese intelligence operatives must have already gotten to all would-be parents.
Moreover, he has a pretty good idea that Taiwan might be independent before Tibet. The world can instigate India all it wants, but who else is going to join India on the high Himalayas. The same blokes who missed Bin Laden in Torah Borah?